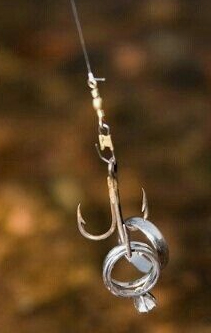 “She’s not coming back, Bobby. She’s not in love with you. Hell, you’re still in love with her, even now. Even after what she dumped your ass, you’re still in love with her. Face it, friend, she’s been with Travis for five months. That’s a lot days.” Mason sucked on the vape pipe and swallowed half the cinnamon smoke; he let the remaining half coat the inside of his mouth and the top of his throat in smokey cinnamon vapor then pushed out it with a hard sigh. “And nights.”

“You agree with me. I can tell.” Mason sucked in more vape. Blew it out. “First is first. Second is nobody. You became second when she divorced your ass and hooked up with Travis.”

Bobby smiled and threw the line into the water. A splash. The ethereal ripple expanded then imbued with and disappeared into the lake’s stable flux and flow.

“Cause and effect, bro. Cause and effect.” Mason raised the Miller Hi-Life can to his lips, tilted back his head, guzzled the last of the beer, mostly foam. He belched. The small cove of Lake Junebug into which the boat had drifted was surrounded by a wall of tree-scarred granite, and the inlet echoed his belch back at him. Mason laughed. The inlet laughed in return. He kissed the empty Miller Hi-Life can, crumpled it, tossed it into the soft moving water. The granite cove didn’t throw it back at him. “Man, I love this shit.” He flipped the top of another Hi-Life, his fifth of the hour. He turned to Bobby,  put his face inches from his best friend. Bobby saw him from the corner of his eye but didn’t turn. “Loooovvvvve thisssssss sssssshhhhit!” Mason tipped his head back, put the can to his lips, flicked his tongue around the edges and into the oval opening. The can moaned and exploded into Mason’s mouth, the juice from the aluminum lover gushing down his throat.

Bobby blushed as an image of her and him exploded in his head. He breathed deeply through his nostrils, the chilly morning area punching his throat and then kicking his lungs. He tilted and flicked his pole, animating the bait skewered on the hook that floated several feet below the surface.

Cause and effect. Fucking phenomenology, she would have said. Bobby preferred Mason’s beer belches and fajita farts and Okie redneck assholeness to her staid and fascist social snobbery. One of the last things she texted to him three months ago, even before he was delivered the finalized divorce papers, was that his choice in friends showed a phenomenal lack in judgement and discretion. That word again. Phenomenal. Bobby could never figure out why she kept using that word. He didn’t think she knew what it meant, but she used it in every other sentence. Hell, she even used phenomenons rather than the misused phenomena: “Everyone knows that phenomena is not the literal plural of phenomenon.”

Not everyone, you sanctimonious logogre! Bobby smiled at this instant neologistic portmanteau. He’d have to remember to write it down and submit it to the OED. Maybe he’d be credited with creating a new word. Hell, bypass the OED: Just start using logogre in Tweets and Facebook postings. Become popular faster. Logogre—a word coined by Robert E. Kanter, Junebug, Oklahoma: logo+ogre—a fascist cruel monstrous word Nazi with pretense of rhetorical acumen.

Still, he loved her.

Absurdity, Thy Name is Pussy-Whipped.

“Pee-yoouuu!” Mason said after a belch. “Use all that fuckin’ bait cuz you ain’t bringin’ it back wid us.”

Bobby looked at the rancid meat lying in his bait bucket. The small patch of skin clinging to the near-blackened red muscle was an ugly purple-blue and several small hairs clung to the flesh in bright white in contrast. Three months earlier, the small hairs were invisible against the white skin.

Bobby softly sang a tune. An old song his grandma had him play over and over when he visited her in the assisted living center.

Oh they call her frivolous Sal
A peculiar sort of a gal
With a heart that was mellow
An all round good fellow
Was my gal Sal . . . .”

“Wha-da hellz-at?” Mason said. He killed off the fifth Hi-Life and birthed a sixth.

“Nat King Cole. Grandma had me play it on my guitar and sing it to her at the assisted living center.”

“Love tha’ song, bra!” Mason slapped his knee and lost his fishing pole in the water. He hunched over, folded his arms across his massive hanging man boobs, and sighed. “Man, sh’ di’ ya wrung, bra. I men re’lllly wrung.” He watched his pole float away. “She re’lllly ma’e ya lock lick a gundg-cold.”

“Huh?” Mason said, staring into the fishing-pole-eating water. He snorted. “Oh, ye’h.” He laughed, but his Hi-Life brain had no idea what he was laughing at, or why.

Bobby pulled his line from the water: The bait had slipped off or had been nibbled off by a crafty fish. With his knife, he sliced off a sliver of the near-blackened red muscle in his bait bucket. This time he included a bit of the purple-blue skin with the small white hairs. He impaled the flesh and skin on the hook; tossed the line into the water.

“Hey!” Mason said so suddenly he almost tipped backwards and out of the fishing boat. “Wha-ver happ-ed da bitch?”

Bobby shrugged. He smiled as his the thought that swam up from the depths of his brain dove into the chilly early morn Lake Junebug water and swam to the bait skewered on the barbed fishing hook: A word witticism even she—the logogre—would appreciate.

*Many of my Fast Food Fiction feasts’ titles come from song titles of the 1920s and 1930s. Today’s serving is the great Bessie Smith’s “Empty Bed Blues.

Thank you to the following Facebook Friends and Readers who provided this week’s ingredients for this Fast Food Fiction tale, especially Flo, whose word GUDGEON as I was able to use both its common and archaic meaning in one sentence, a rarity!

Author of 14 YA novels of mystery, horror, fantasy, science fiction, and adventure. View all posts by LMG Swain

LMGSwain-Maker of Tales & Weaver of Dreams

LMGSwain-Maker of Tales & Weaver of Dreams